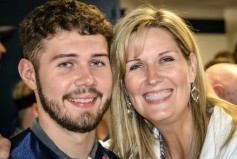 I’m the mom of a recent college graduate. My son, in his early twenties, is now working full-time and living on his own. Woohoo! As a parent, it feels amazing to celebrate the day a child becomes a productive member of society.

Having a young adult child doesn’t mean we are suddenly hands-free, though. They still need us for little things that come up along the way. For instance, ‘Hey mom, how often do I need an oil change?’, ‘Hey mom, how do I get renter’s insurance?’, and ‘Hey mom, how much does WiFi cost?’ (If I could insert the sound of screeching tires here, I would.) ‘WiFi?? Son, don’t you mean internet?’

No. He didn’t. He meant WiFi. He explained he didn’t want to pay for internet because he would never use it. For the first time, in a long time, I felt more knowledgeable about technology than my millennial child. My giddiness didn’t last long, though. I realized quickly, if one person was thinking this, there were likely others thinking the same thing.

I wasn’t wrong. Trust me – I am in no way, shape, or form poking fun of or mocking anyone. It just dawned on me there are a group of people who have grown up only using the wireless technology known as WiFi. This group has not yet had to pay for their internet – but has always been connected to it. The term ‘internet’, to most of them, means something wired to the wall, and connected to a non-mobile device. They are so accustomed to mobility and connecting to wireless networks, when it comes time to subscribe to their own services, they only want to pay for something they plan to use.

Let’s start with probably the most important piece; the difference between internet and WiFi. Your internet and your WiFi are two separate things. You cannot get WiFi without an internet connection. ‘Internet’ is what you (or the establishment providing free WiFi) subscribe to from an ISP (Internet Service Provider). This entails a recurring monthly fee which is widely based on the speed you subscribe to. Because it is so important to this article, I’ll say it again. Without an internet connection – you cannot have a wireless connection (WiFi).

To humor all of you asking, ‘ya – but why can’t I just have WiFi?’, I’ll try to further explain. The internet is the technology allowing us to connect to the outside world. Think of internet as train tracks. A train needs tracks in order to move. Without the tracks, a train is relatively useless. Once the tracks have been laid, the train can depart the station full speed ahead. Think of your internet as the tracks and your WiFi as the train; so, just like a train cannot move without tracks, you cannot access WiFi without an internet connection.

Your internet service can connect you to the outside world a couple different ways. One is via an Ethernet cable (think of the traditional desk top computer), another is through a WiFi router (what your cell phone, tablet, smart TV, etc. will detect). The WiFi router allows the internet to connect to devices without a physical connection. So, the long and short of it – you can have internet without WiFi, but you cannot have WiFi without internet.

I think our confusion began when we started using the term WiFi synonymously with access to the internet. Most of us associate WiFi with ‘free internet’ when we are out and about rather than what it really is - a portal to the internet. So, I’m not surprised at all that we have a generation confused by the terms.

Having said that, it can be difficult to differentiate between your internet being ‘down’ and your WiFi ‘acting up’. If you have a desktop or other device connected to the Ethernet cable (the wire coming out of the wall) it is easy to test. If that device is working – the problem is likely with your WiFi connection. If you do not have a wired device, you can start the troubleshooting process by going to your router, unplugging it, waiting five seconds, and then plugging it back in. I’m not an expert, and I know it seems cliché, but the bottom line is, almost all home WiFi issues can be resolved by resetting the router. If that doesn’t work, give us a call and we will be glad to assist you with it!

The other issue I frequently hear, is the WiFi is too slow. Something important to keep in mind is that WiFi is essentially sharing your internet with multiple devices. If I have a garden hose hooked up to the spicket outside my house, it will do a great job getting water from the house to my flowers. However, if I connect a splitter hose to that same spicket, no additional water is going to come out – it is still the same amount of water, only now it is being divided amongst two hoses – essentially cutting the amount of water in half. Your internet connection is virtually the same concept. The same amount of internet is coming out of your router regardless of how many devices you connect. So, if you have one device, you are getting all of it. If you have two, you get half, three is one-third, etc. While this isn’t the exact science, I’m sure you get the picture. It basically boils down to the only way to get more ‘juice’ to each device is to increase your bandwidth (internet speed).

So, to wrap this up and answer my son’s question – the only cost for WiFi is how much you choose to spend on your router. (This might be a topic for a later discussion – but keep in the back of your mind that not all routers were created equal. You would be best served by doing some research on which one will fit best with your home.) To take this a step further, your internet costs will vary greatly from providers, type, speed, and location. My motherly advice to anyone looking at internet services, take your time, evaluate how many devices will be using the service, and ask a lot of questions. ISPs like BVTC are more than happy to walk you through the process and help you find the best solution for your needs and your budget.